Today, even though it is the one-year anniversary of my son’s death, a chihuahua with wheels on its hind legs attacked my little terrier mix, Lola, during our morning walk. (Lola’s shaken but OK; I yanked her up into the air by her harness, and wheels-for-legs may be fast, but she can’t jump.)  The chihuahua let me know first thing that the world is not going to stop to help me mark this sad day. The dog still needs to be walked and comforted. The gas still needs to be pumped, the online bills paid, the deodorant applied.

I am glad for this anniversary marker, though, just as I was glad for the one-year memorial event; both dates gave me a deadline to work toward and let me imagine I might achieve some closure.  Of course there’s no end to my grief, but I am hoping to use this date as a demarcation between the year I spent actively grieving and the years I will spend with grief as my steady, loving companion rather than as a micro-managing, hyper-critical, tyrannical boss who doesn’t believe in coffee breaks.

The memorial event this past weekend was beautiful, or at least that’s what the friends who attended have kindly told me. I spent most of the day feeling a bit out of my own body. It was blazing hot and muggy, and I had set up craft tables outside for people to do scrapbook pages with Kyle’s photos, paint rocks with messages from Kyle on them, and write letters to his someday-teenage daughter, Maggie, about what Kyle might wish for her or want her to know. I didn’t do any of the crafts and mostly stayed inside in the air-conditioned cool

of the house playing video clips of Kyle as a baby, as a stand-up comic, as a poet, as a rapper, as a brother and a friend and a son. I felt huge gratitude to every single friend who showed up (or even just sent loving messages) and to the dear ones who flew and drove for many hours to be with us — but I didn’t feel Kyle’s spirit when we stood around the grave marker and lay down our heart-shaped rocks and tried like hell to feel him in our hearts.

Happily, when we were a smaller group gathered inside that evening, his spirit infused us all as we held hands at Jamie’s suggestion and sang Stand By Me —  and then had a truly joyful dance and karaoke party.  When I had asked Kyle what we should do to mark the day, he told me he wanted us all to laugh a lot and have a fun party.  I was annoyed; I didn’t see how that was possible. But it turned out he was right; laughing and dancing and being joyful is the only true way to feel his spirit as it lives on in us.

As I was typing this, Jamie called; she said Kyle had directed her to reach out – and it turned out the last words I had typed before my phone rang were “messages from Kyle,” so that was kind of cool. I read Jamie my opening paragraph and she said she was having the same thought as she looked at her day’s calendar: she has two home visits to make and a class of 20 pre-schoolers to teach, and will be seeing a parent whose six-month-old baby is having open heart surgery today. So she, too, was struck by how life was pulling her in and demanding her attention, despite this supposed momentous anniversary. We both know keeping up with life is good for us; the alternative serves no one.

In Judaism the one-year mark is significant; children, parents and spouses who have grieved all year are supposed to mark this anniversary with a Yahrzeit candle reflecting the fragility of life, the light of the soul, and a verse from Proverbs: “The soul of the man is the candle of God.”  This year, making the significance of this  anniversary even more clear, the anniversary of Kyle’s death falls on the start of the Jewish New Year, Rosh Hashanah –a day when Reform Jews eat round challah to celebrate the circle of life. Many Jews also mark the occasion with a tradition called tashlich, which means “casting off” in Hebrew; when my children were little we would throw bread into the water to represent everything we wanted to cast off from the previous year. We would each say something we were sorry for and wanted to do differently in the year ahead.

In my current friend-family, we celebrate by making water colors of what we are repenting and wanting to shed — and then throw our artwork into a baby pool until whatever we’ve painted has been washed away.  I’m not sure I can join my friends for this ritual tonight; I think I need to stay home – but I know what I want to cast off. It’s been a year of self-absorption and sad reflecting, of questioning every choice I made and 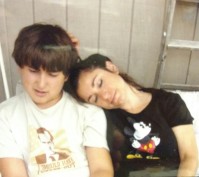 Today I will endeavor to let my regrets go and to celebrate all that was bright and beautiful in my boy, as doing so is what truly allows his memory to be a blessing.

Shanah Tovah, my friends — here’s wishing us all a good year.

Mothering adult children is hard. Being an adult child isn't easy, either. View all posts by Lanette Sweeney

4 thoughts on “The New Year”

Everything is Before and After

A novel I loved in my 30s was a domestic suspense thriller, Before and After, by RoseEllen Brown. The teen son is accused of murdering his girlfriend– after which everything in the protagonist’s life suddenly divided into before and after that crime changed all their lives. Kyle’s death is that way; I date everything by it now, and I know the rest of us do, too.